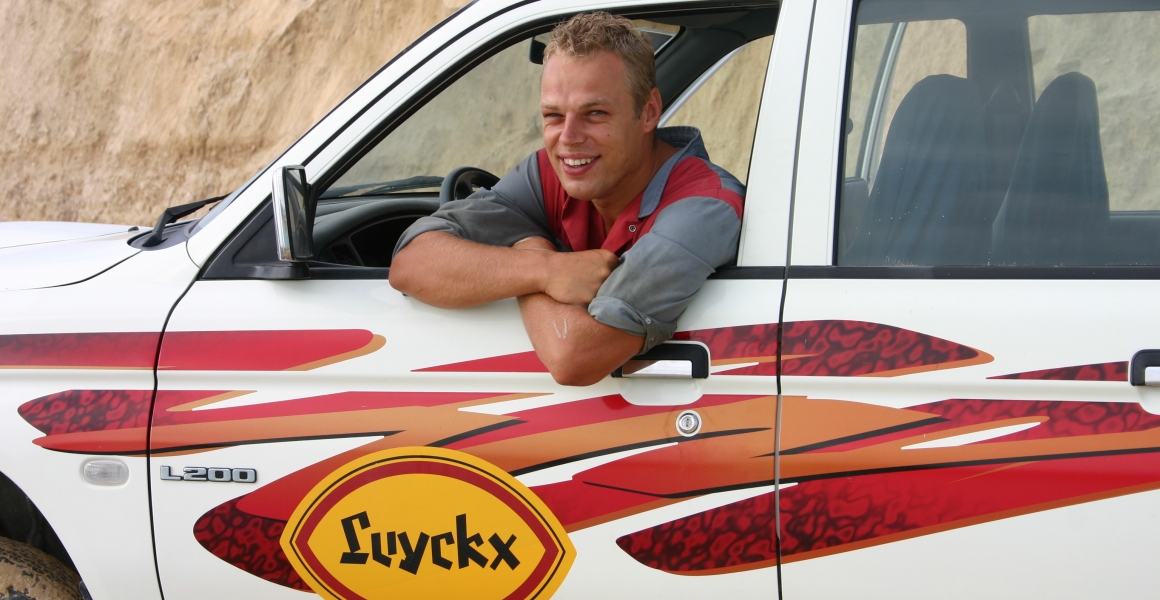 Luyckx has been a household name on the Belgian market for many years now but not everyone knows that the Brecht-based company is also active in Dubai. In his early twenties Wim Aernouts travelled to the Middle East for Luyckx and he founded Middle East Crane. It was the start of an ambitious adventure...

From Brecht to Dubai

Wim, how did it all start for you?

Wim: Well, the story starts with my summer job at Luyckx when I was fourteen. Two years later, at age sixteen, I joined the firm as an apprentice and went out on the road with the mechanics. To be honest, I didn’t handle much more than a broom and a paintbrush at first, so I learned the trade as I went along. And then at twenty I was sent on my first foreign assignment out of the blue: a project for Jan De Nul in the Philippines. 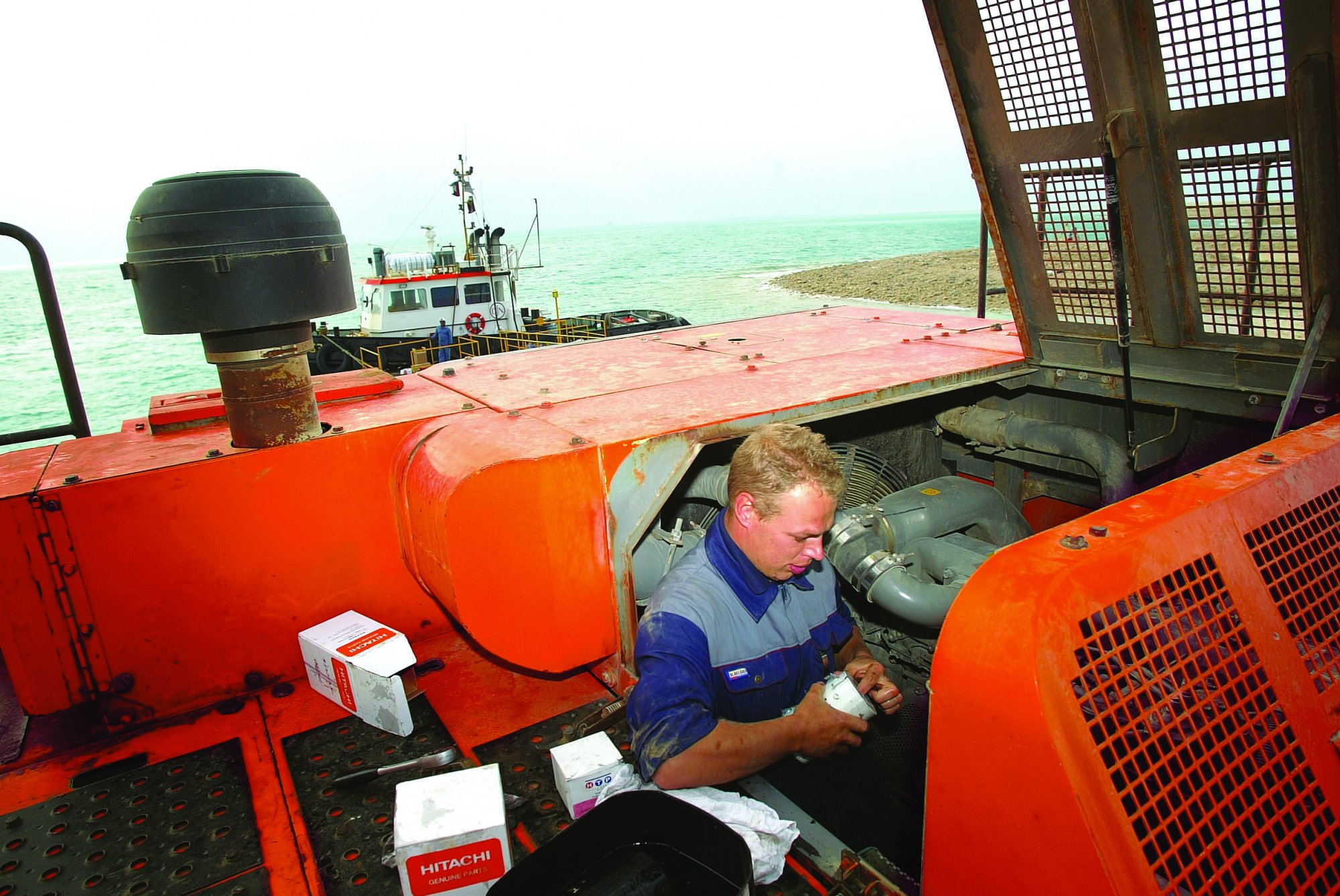 Wim at work on a crane in Dubai.

How did that go?

Wim: It was quite an experience. You see, I’d never flown before, my English skills were non-existent and all of a sudden there I was, in the Philippines. But I managed, I’ve always been able to fend for myself. You sort of ease into it. Of course, it helps if you’re a bit adventurous and you don’t scare easily....

And that was just the beginning?

Wim: Absolutely. Together with colleagues from Brecht we followed Jan De Nul across the globe. They called on us for new projects involving Luyckx machines. Once the project was up and running we would hop on a plane to the next location.

So how did your adventure in Dubai start?

Wim: My adventure - and that is the right word - started in May of 2004 when Jan De Nul started working on one of the Palm Islands. We had the opportunity to sell machines there as well, coupled with a service contract. Jos Luyckx asked me if I would be interested in travelling to Dubai for four months to keep those machines operational together with the team from Jan De Nul. I didn’t hesitate a single second. Due to the scope of the project (more Hitachi excavators kept arriving) those four months eventually turned into five years.

From technician to entrepreneur

You founded a company some time later?

Wim: Yes, well, what happened was that the projects kept expanding. Other Belgian customers such as Aertssen and Besix (Sixco) also gained a foothold here. What’s more, some of the local players also got to know us. The construction of Super Long Fronts in particular proved to be a door opener. More work kept pouring in. One thing led to another and that’s why I stayed here all this time. Jos and I were starting to build a network here and then we decided to apply for a trade licence to be able to sell our machines locally and extend our service. The first company, Luyckx FZE, was founded in 2009. In 2011-2012 we adopted our current name of Middle East Crane Equipment Trading. 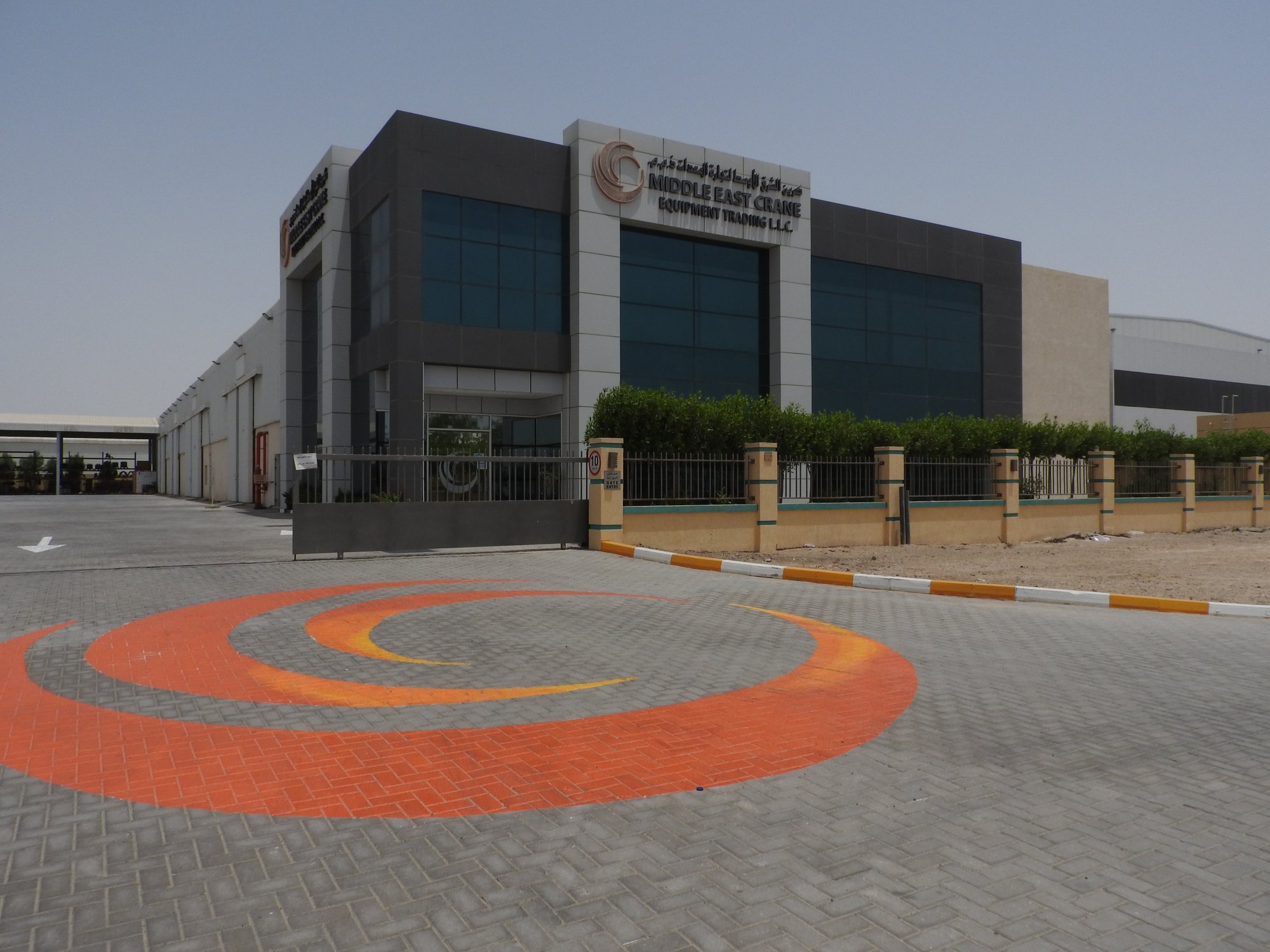 So in fact you went from technician to entrepreneur. How does that work?

Wim: That’s a tough one to answer. How did that happen? It’s a step-by-step process and maybe I just have the entrepreneurial gene.

But Jos immediately recognised your potential?

Wim: I think so. Of course, Jos has known me for the longest time. We’re practically family. Jos and I grew up together. When I had my summer job at Luyckx when I was 14 we really got to know each other and our mutual trust grew from there.

How difficult were those early days in the Middle East?

Wim: That was true pioneering work, no doubt about it. And the heat was especially tough. Temperatures varied between 35 and 45 degrees, 24/7. That takes some getting used to at first but I never had second thoughts or shed a tear. I simply kept going. Besides, there were no other options. I ended up with the dredging crew, those guys are really tough. In their world you have to be able to hold your own so you adapt. Jos was a great help but for the rest I was completely left to my own devices. I had no wife, no children and at first no colleagues either. I just went with the flow. I worked very hard as well, sometimes day and night.

And what about a culture shock?

Wim: Oh, you just have to adapt. Actually, we work with a variety of cultures here: Filipinos, Pakistani, Indians, Egyptians, Lebanese, Saudis... Sometimes people ask me: “How do you do that?” But you have to keep in mind these are the people that built Dubai. They built the highest towers in the world, of course it can be done! I’m not saying it’s easy, but it’s possible as long as you keep adapting. And then there’s the local Arab culture, of course. That’s a different concept altogether. Not self-evident but both interesting and challenging.

What do you mean?

Wim: It’s complex. You need to adapt to that as well. Communication is totally different from back home. You have to act faster, be on your toes. Out here decisions are taken in a flash. And those decisions can be reversed just as quickly. So you need to be extremely flexible and keep faith in the very fickle and uncertain market. Anyway, I’m a true chameleon so I manage. And every once in a while I fail. Call it trial and error. It’s never easy here but things always turn out OK in the end. You lose some but you win some as well. That’s how it works. You have to be able to handle that.

Do you sometimes wonder what you got yourself into?

Have you grown significantly over the past decade?

Wim: I married a Japanese woman and we have 3 children. So our home is about halfway between Belgium and Japan. It’s impossible to build a permanent social circle here in Dubai. Expats come and go. Still, we know quite a few Arab families that have really accepted us. I do feel at home here actually, but it’s not for everyone. You also have to be able to adapt in your free time. It doesn’t bother me. Also, Belgians are very much respected here. We have a reputation for being dependable and that helps. 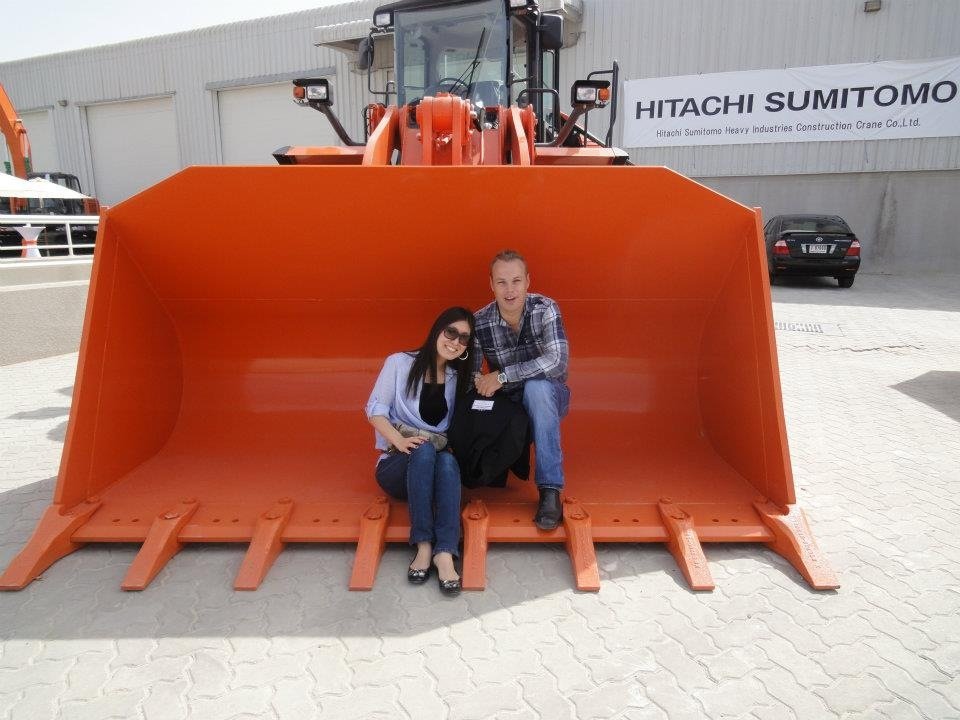 Wim and his wife Aya.

Does Luyckx do the same in Dubai as in Belgium?

Wim: Our operation in Dubai is actually a mini version of Luyckx in Belgium but our range of activities is somewhat more limited. Here we only use the brands Hitachi and Sumitomo. Our machines are primarily used on very technical and complex worksites. That is why we adapt so many machines, our so-called Special Applications. We have an excellent reputation for our high-quality adaptations, which are carried out by Luyckx Belgium. They are designed and built by our team in Brecht and we take care of the installation and any small adaptations. These machines are sold on our home market here in Dubai and we also service our clients from all over the world, from the Middle East to Africa and from the Philippines to Australia. We adhere to the same strict service standards as our parent company in Belgium.

Is there a good working relationship between the two companies?

Wim: Oh yes, there’s a great deal of cross-pollination between the two. We learn from each other and we exchange a lot of knowledge. Perhaps we specialise a bit more in the larger and very large machines.

Wim: We have excellent future prospects! Obviously we ride the wave of success of our Belgian contractors but our own network is constantly expanding as well. We are witnessing a slow and steady growth in terms of presence on the local market. And our new base of operations in the port has considerably enhanced our storage capacity, giving us a logistical advantage. That has definitely strengthened our position.

Your work has truly become part of your life, hasn’t it?

Wim: Yes, it has. And always with a smile, from dusk till dawn. It’s just that I love my job. I also have a lot of freedom and the business is going in the right direction. That’s a good feeling.

Do you think you'll ever move back to Belgium?

Wim: I don’t think so. Someday perhaps, but I don’t know if I could get used to living there again. On the other hand, I’m no stranger when it comes to new locations. One thing’s for sure, I’m never leaving Luyckx.

When you were 14 or 16, did you ever imagine yourself in a job like this?

Wim (resolute): No, not one second. The thought never crossed my mind. We got started and we just kept going. It’s not something we actually think about. Neither me nor Jos.

Wim: (Laughs) Many people have said that to us over the years and I think they’re right.

Are you proud of what you’ve built in Dubai?

Wim: Yes, we are. We’re proud of our achievements. Moving from Brecht to the Middle East has been the story of a healthy dose of guts and courage, but also of the financial capacity the firm has built over the years. But it’s definitely been an adventure and it’s not over yet! 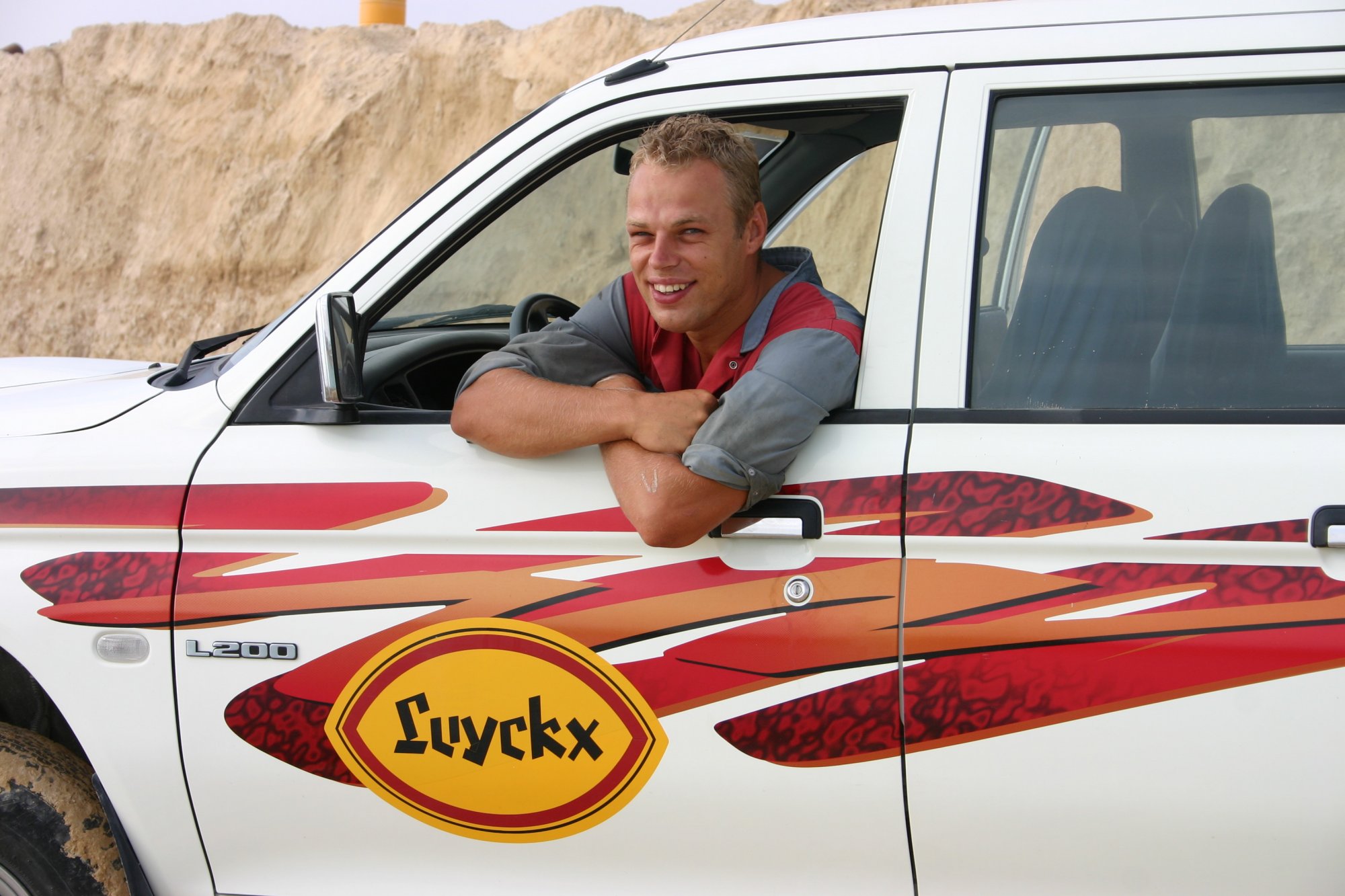 The start of an ambitious adventure...