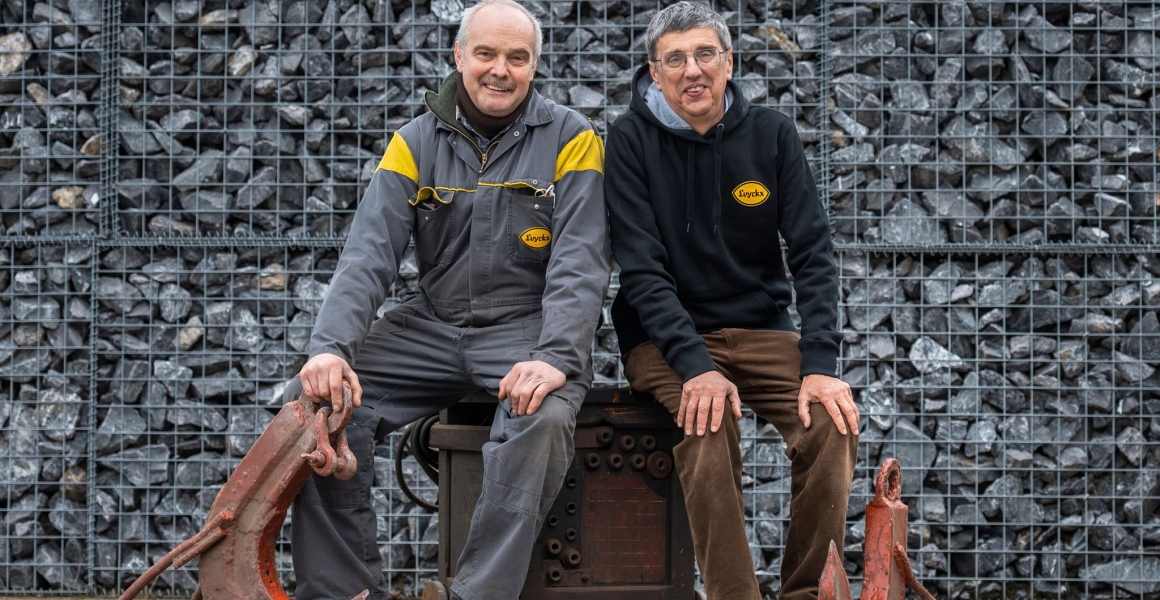 The engineers and technicians at Luyckx achieve ‘miracles’ every day. So it’s high time to put the Special Applications department in the spotlights. Miracle workers Jos Luyckx, Louis Vinck (foreman), Kris Meeus (engineering manager) and Johan Stes (Special Applications mechanic) tell us with much enthusiasm why they are so excited about the construction of special applications…

What are the origins of the Special Applications department?

Jos: Back in the day father started clearing woodland. Here at Brechtse Heide this mainly consisted of pulling out bushes. In those days, there were special bush hooks that you could hang on the back of a winch on a tractor, allowing you to winch the bushes out of the ground. But the hooks were always breaking. Every couple of days a crack would appear and it would need repairing. Then it was off to ‘t Smidje, the local smithy.

Jos: That’s right. The smith from Brecht. But all those repairs cost our father a small fortune. That’s why he went out and bought himself a welding machine. So Jos Vinck – our very first employee – had no choice but to learn to weld (general laughter). That’s what happened. So it wasn’t long until my father and your father (looks at Louis), Jos Vinck, began making those bush hooks for themselves. In fact, that laid the foundations for what is now the “Special Applications” department. That thought struck me again recently. It brought tears to my eyes, it really did. Anyway, that’s how Luyckx began. 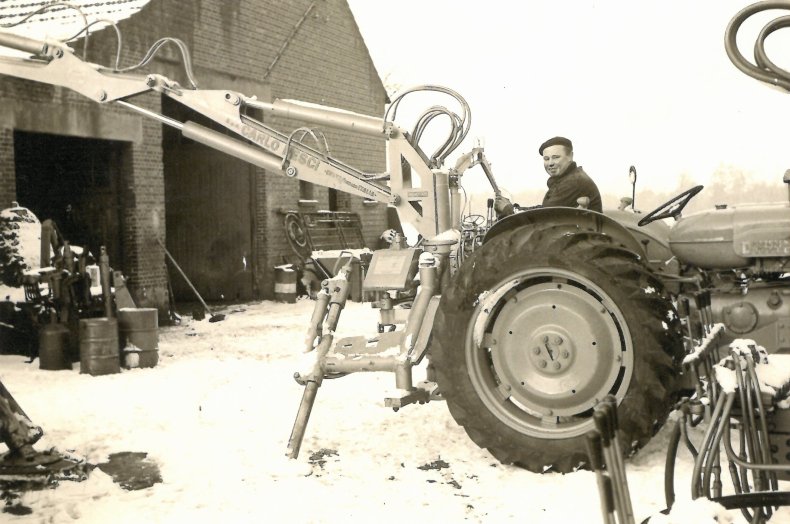 Jos Vinck with a Carlo Pesci crane mounted on the back of a tractor.

Later you also built a chassis around a tractor on which to construct cranes?

Jos: Correct. That was the real start of everything in fact. It was in 1963. The days when things were still done by hand, hand-crafted. We mounted reinforced chassis on Fordson tractors in those days.

Louis: At the time we did it by cutting out a piece of cardboard, which was then used as a mould to cut out steel plates.

Where did you find the necessary knowledge?

Jos: It was a matter of having a go. Trial and error, and never stop trying … We learned a tremendous amount on the shop floor, because there was little training available in those days. Louis joined us in 1980. He was a carpenter. That’s how it was then. He learned everything on the job.

Louis: We kept building knowledge. For instance, we installed transhipment cranes on lorries. That knowledge came in handy when we started installing extended arms on cranes later on. 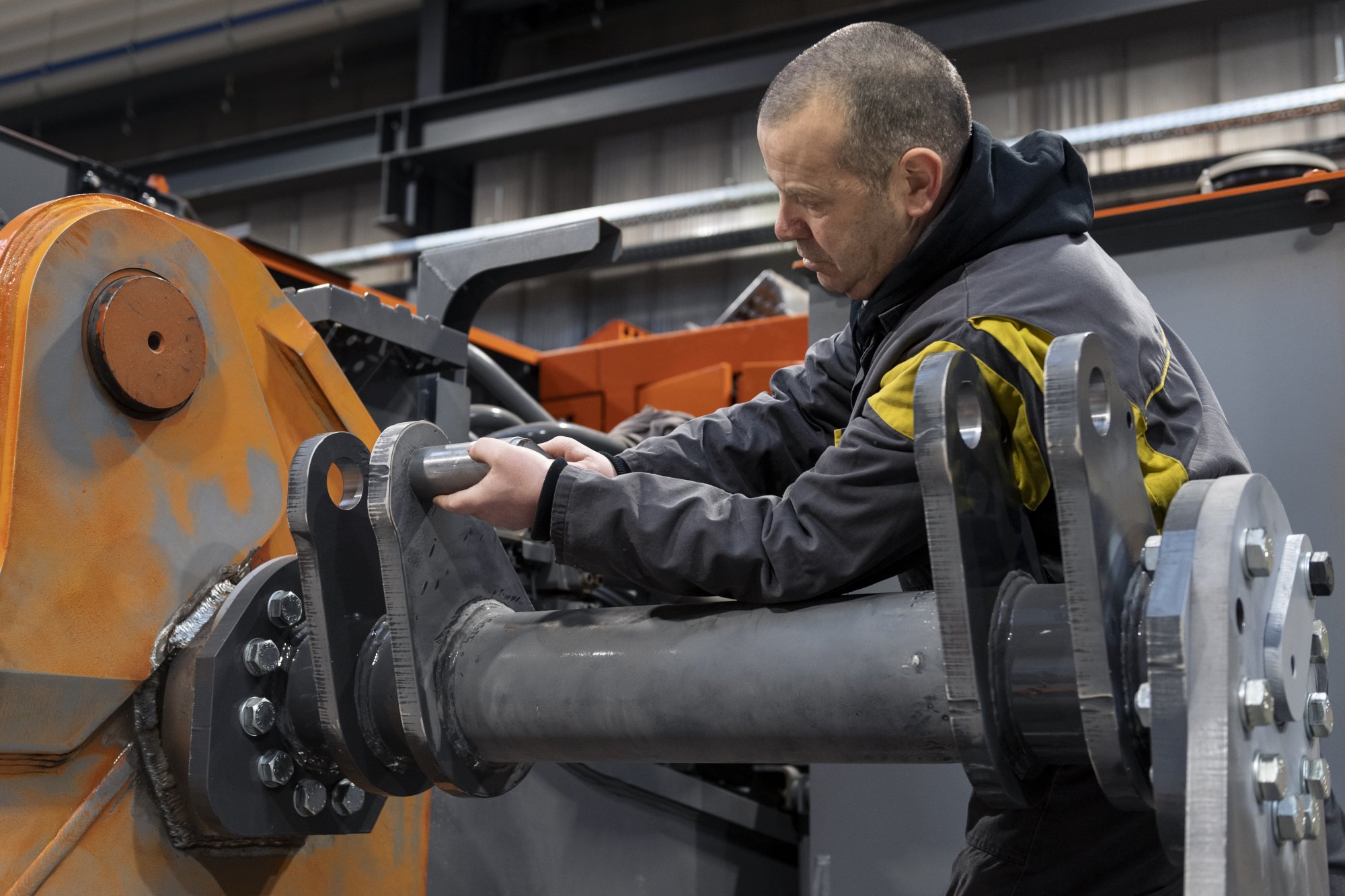 Jos: Jan De Nul asked us to make special applications for excavator cranes. They needed them to build the Palm Islands. They gave us the challenge of developing a super-long front excavator with a 29-metre arm. And we simply said “yes”.

Kris: It was during that period that we first invested in design software.

Jos: Customer enquiries were always the beginning …. And we never said no.

Kris: Yes, that’s true, but it was always step by step, isn’t that right Jos? Achieving great things in little steps, that has always been our philosophy. Of course, there were still some tense moments. I remember, just a few days after joining the company, a request came in to build a 220-ton crane. I was thrown in at the deep end.

Jos: That trend continued. The biggest crane we make today weighs 260 tons with a 43-metre arm.

Kris: We also built several so-called “Starfishes”. Automatically adjustable cranes that can operate in water. Louis was in charge of that particular project.

Louis: Indeed, one day Jos gave me the task of dismantling an entire 80-tonner. “Take absolutely everything apart”, he said. A brand-new crane, and off with the arm, off with the caterpillar tracks, out with the motor, … You name it, absolutely everything. And then I had to bring Kris in. “Kris, now you need to draw something similar so I can put it all back together again.” (general laughter)

Kris: Yes, together with the team we measured all the suspension points. We worked all weekend to develop a brand-new chassis…

Louis: … in which Kris added guides so the crane could go up automatically.

Kris: Goodness, I can still picture us back then. It was really pioneering stuff. Drawing and redrawing, and then checking if it actually worked in practice. And if it didn’t, you could stand there and look at it, but not Louis… He looked for solutions and got down to work. 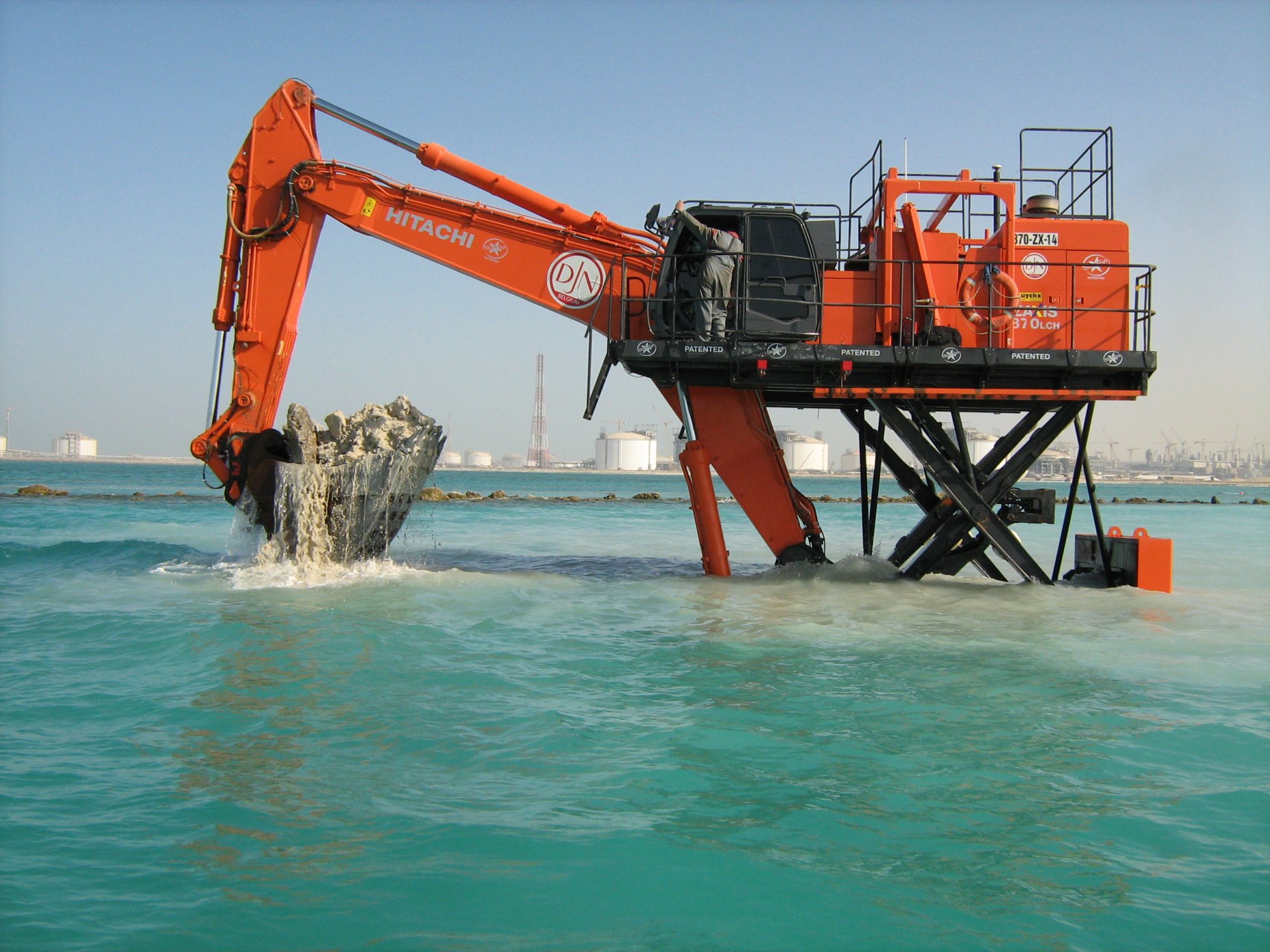 You need to understand each other as an engineer and a mechanic?

Kris: You bet. The 2 need to work together.

Johan: It is always a partnership. One always thinks of something that hadn’t occurred to the other. And that’s how you come up with solutions together.

Louis: Those “Starfishes” were one of the greatest concepts we ever built.

Kris: Now they are fixed constructions: “elephants”. We build lots of those.

Jos: We do. And they are used all over the world. As far as the Maldives. 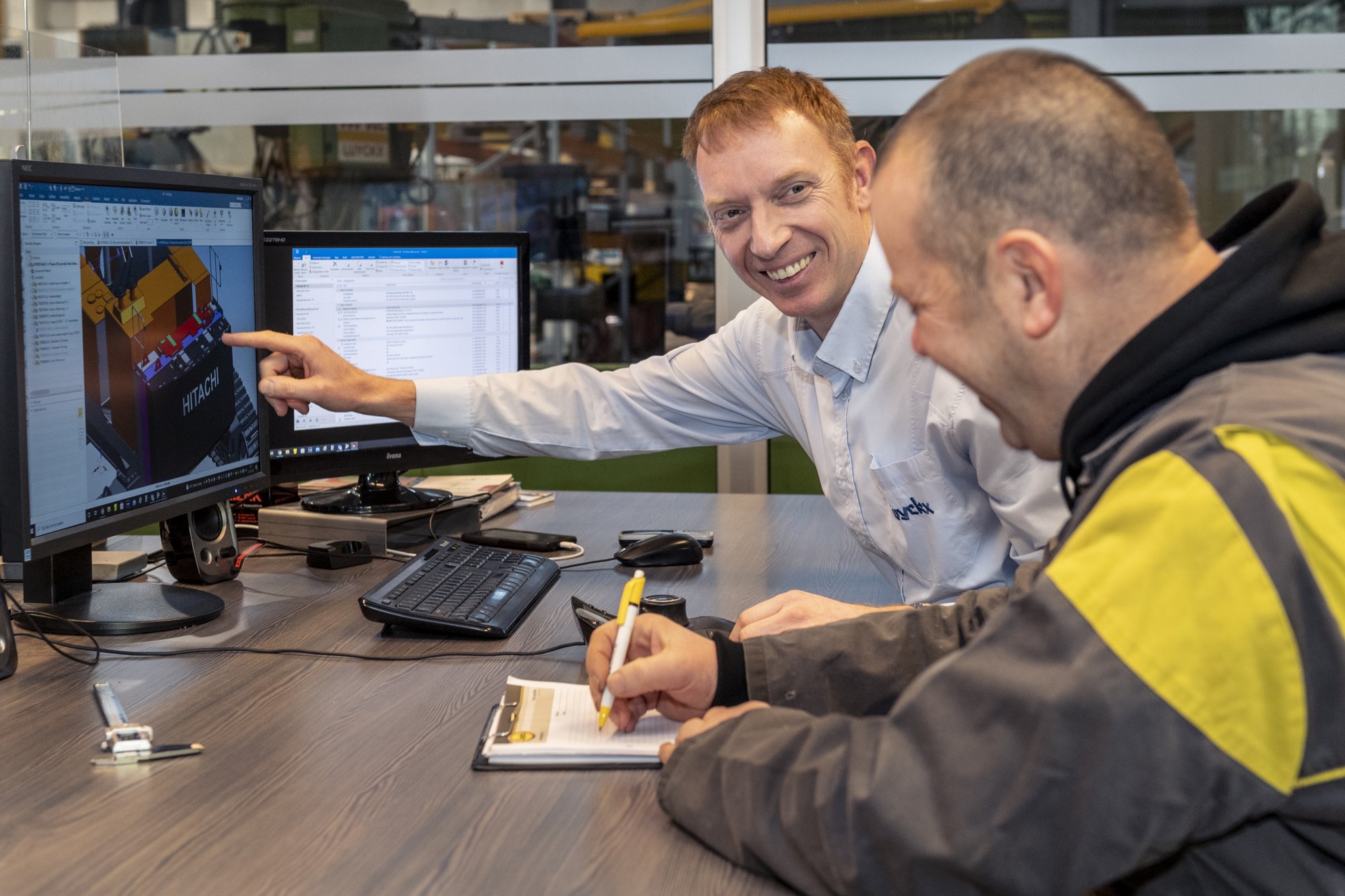 Isn’t that amazing? A company from Brecht, a bit secluded in the woods, yet your machines are used worldwide.

Kris: Yes, that is rather amazing. Costa Rica, Dubai, and all those other places.

Jos: Of course, that’s because our customers are often global players. They have helped in shaping our success.

Super-long fronts, Starfishes, …. What other special applications do you make?

Jos: We once built a machine that could dig at 20 metres below sea level. It could be operated with hydraulic controls from a boat. A unique machine.

Louis: And transhipment cranes where we add a new front, long arms from standard machines, offset booms, dipper dredgers, … In principle we make anything the customer wants. The projects we take on are sometimes impossible.

Kris: Over the years you actually start to think it’s normal. We once made a crane on a floating pontoon. We called it “Jerommeke”. That was not a standard project either …. It was sold by the pound. True story...

Johan: The challenges have become our daily business. We no longer realise it; the dimensions, the uniqueness…

Louis: That’s right. It seems self-evident: those complex machines and what they are expected to achieve. We never stop to think about that anymore but maybe we should from time to time.

Impossible projects…. Yet you manage every time?

Louis: That’s partly thanks to Jos, in fact. He says: “There is no way back, it simply has to work”. But always in consultation with the customer (laughs).

Jos: It’s true there are few companies that embark on such an adventure. Our advantage is that we have everything under one roof. That makes us unique and it makes the difference.

Louis: In all modesty we have made a name for ourselves in the sector. Even our competitors say go to Luyckx when projects are too complex.

Jos: And it all began with that bush hook. My father and Jos Vinck set the wheels in motion.

Louis: The philosophy is still the same. Take it on and take action.

Louis: Yes, overcoming difficulties and taking the learnings with you to the next project, to keep doing better.

Kris: You now have the extra pressure of deadlines. Delivery times keep getting shorter. We have really had to organise ourselves around that.

The job is an important part of your lives?

Jos: Yes, you go to bed thinking about it and it’s the first thing you think about when you wake up.

Louis: It’s the same for all of us.

Kris: As a job it is also tremendously satisfying. You see the results, you truly offer customers a solution to the problem they were facing. When you know that our machines cost blood, sweat and tears, but actually do what they are meant to, and how they are used in all those incredible projects, then that gives you a real boost.

Louis: For me, there is also the challenge of making complex machines as simple as possible to assemble. That’s no easy task.

Kris: For example, extending the scope of cranes by adding an extra bend in the boom. For me, that’s the real challenge. The fact that you can make something different every time.

Louis: But always starting with a strong foundation.

Johan: There are no standard assignments. The tasks are big, and there is lots of variety. That really appeals to me.

Jos: Also, it’s never a one-man-show. It’s about teamwork. Working together to build something from scratch. It’s helping the customer that drives us, I think. We also receive plenty of appreciation from our customers. That is certainly very satisfying.

Are there actually training courses for this kind of work?

Kris: You can’t learn at school about the kind of things we make here.

Louis: You learn it here on the shop floor. It takes years to master it. The older generations pass it on to the younger ones.

Johan: It’s not just the visible levers, there’s also the controls for valves, mechanics, electronics… you name it. We do everything here from A to Z.

Louis: And that demands a certain amount of creativity.

The workshop where the Special Applications are built.

What does the future hold for Special Applications?

Jos: The projects are becoming ever more groundbreaking and as a result so are our customers’ requirements. So we need to keep up.

Kris: Increasing our efficiency, a flexible approach and continuous innovation.

Louis: And, once in a while, remembering that bush hook where it all began. 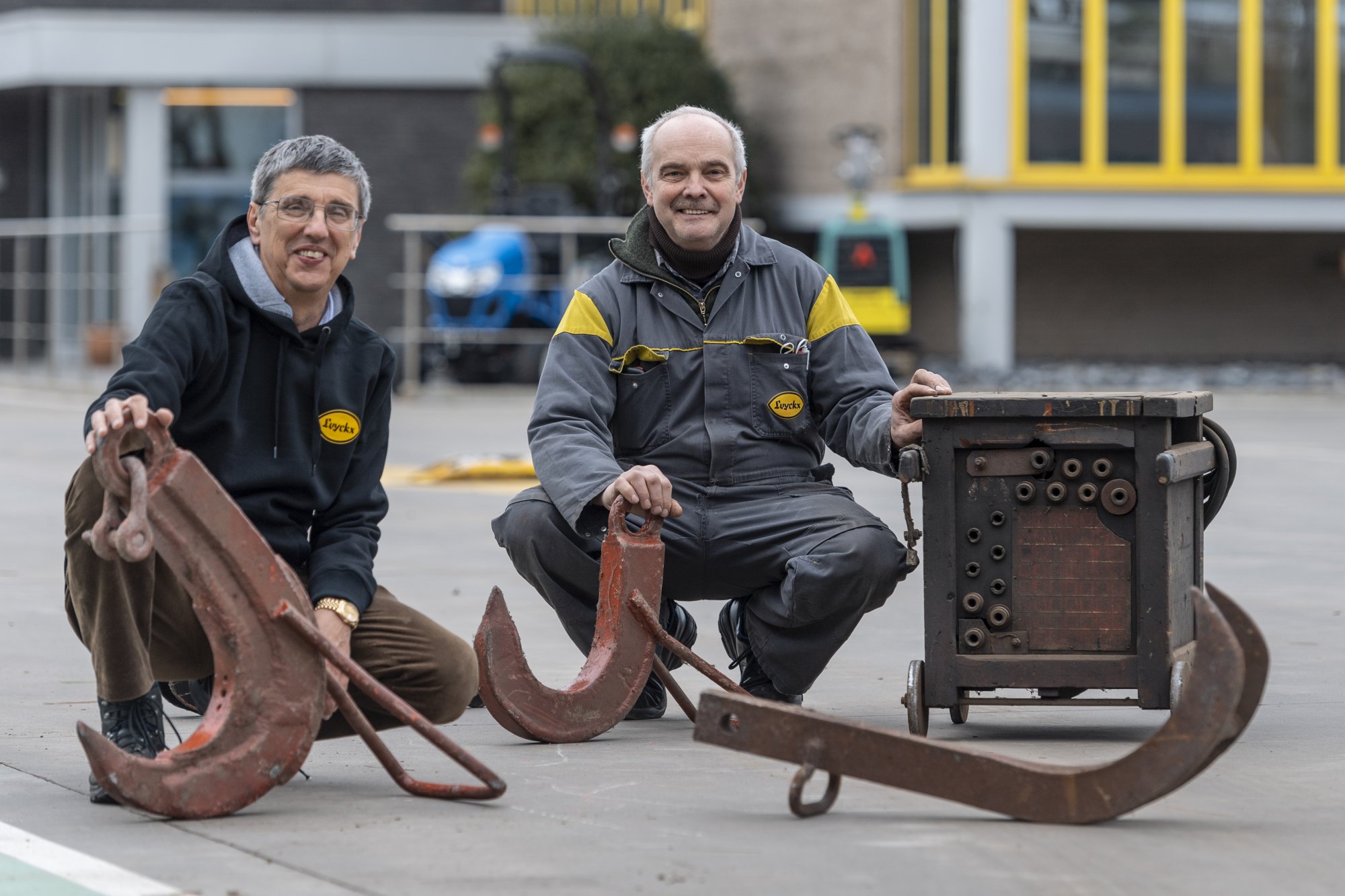